So I will start off with back in my heyday I would browse Craig's List and shoot out some low ball offers on things that look interesting. Sometimes it would work and id get a neat project to wrench on for awhile then id get board and sell it. Most of the time i made money and this is just what i did for a few years in high-school before i graduated and got a real job. over the years sometimes id pick up a random project here and there. But because having the money in hand from the last project before i got to the next was no longer really a thing some of the projects didnt really get finished. When I got my own house and became a dad I got rid of all of my project vehicles and started thinning out my projects. Fast forward a few years and I have my Ducati SuperSport. Now i started tinkering with my SuperSport, this was not really a good path. The SuperSport is under warranty and I really did not want to do anything that would cause me hassle with my warranty or reliability. So i had this thought cross my mind what if I got something that was slightly wrecked that i could pull apart and put back together. I had done something like this with my 99 Honda VFR800. My 99 VFR800 was dropped hard and stunted on a bit then someone thought they would try to make it look good naked. It did not work so i had redone all of the body work on it and made it look really nice once i was done. So i started looking around for fun but realized id probably have to go to an insurance auction to find something like a wrecked Ducati that someone didn't just fix before selling. After looking around for a bit i ran across one on eBay. It was the only one on eBay as far as wrecked Ducatis went. I looked it over the post went something as followed.
"""""""""""""""""""""""""""""""""""""""""""""""""""""""""""""""""""""""""""""""
2008 Ducati 1098 Superbike
Only has 8,750 miles!! Leaving the country and need to sell!
Engine runs fine, take a while to start in the morning.
Comes with a spare battery. Both batteries are dead, so will have to charge them
This bike is not road-ready, I fell in a turn so needs a few repairs first.
The minimum repairs required to drive this bike on the street are listed below:
- Front wheel (cost on ebay used is about $250)
- Front left and right brake calipers + brake pads (cost on ebay used is about $350 for both calipers and $20 for pads)
- Front left and right brake disk (cost on ebay new is about $100 for both)
- Fairings have a few scratches, but no real need to fix (slight esthetic issue). All fairings screws missing, but you can find a set online for approx. $10-$15
- Front Brake lever needs replacement (Broken short) cost for that ranges $30-$200 depending how nice you want it.
Total cost for repairs is approximately $850+labor
*This bike also comes with rear wheel stand (Shown in pictures) 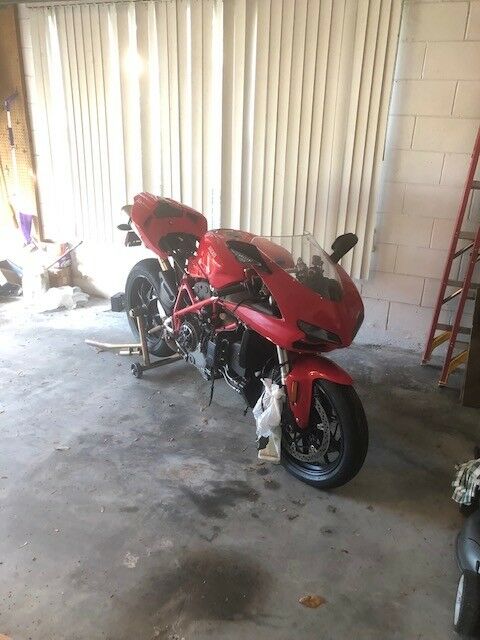 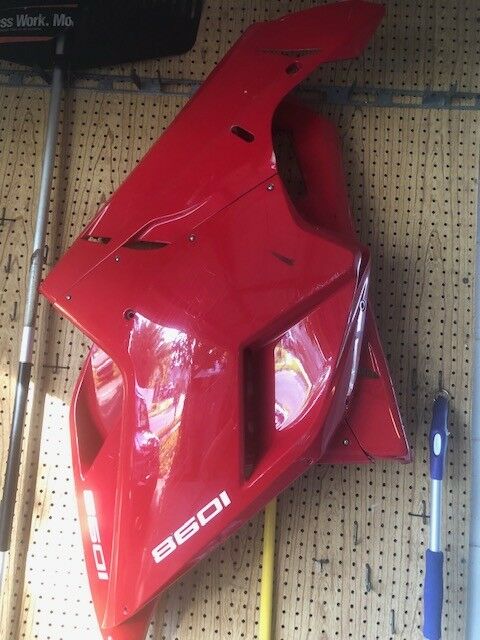 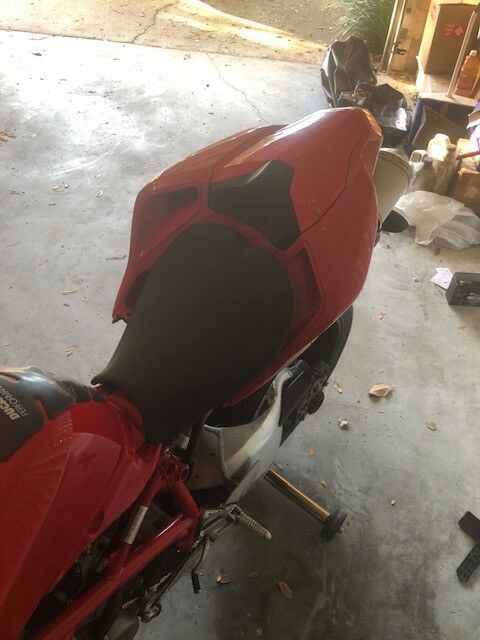 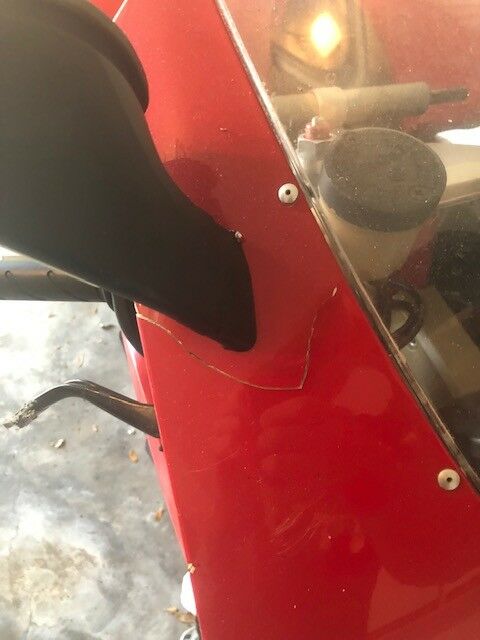 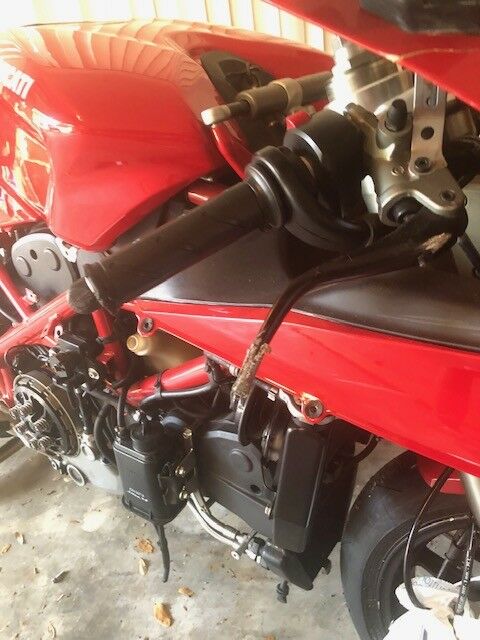 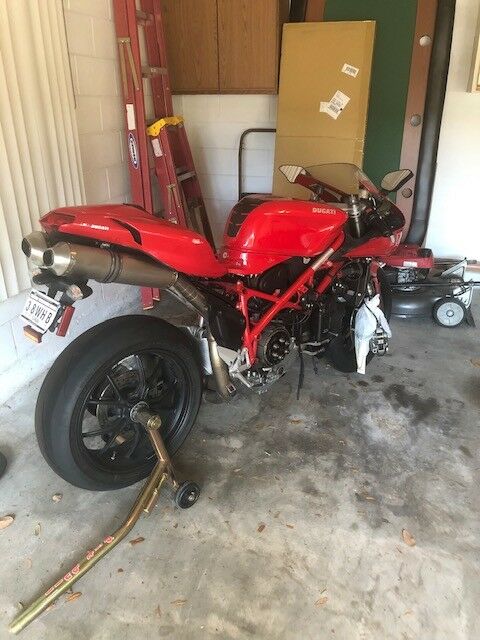 """""""""""""""""""""""""""""""""""""""""""""""""""""""""""""""""""""""
So it was posted for $4000 with the option to make an offer. It was posted as a clear and clean title. I looked over the pictures and parts and shipping and figured that id toss a $2000 offer on it. I basically did this for fun if you have ever tossed a low ball offer on something you get a little bit of a rush from it. At this point I figured worst case it would be $2000 plus $500 shipping from Florida (what eBay said it would be) and $1000 for the parts listed. that is $3500 for a bike that BlueBooks for $7300 now looking at this I knew it was too good to be true however he did have it posted for $4000 and with shipping and parts that would put it at roughly $5500 plus at least a couple grand in labor so it all looks like its about right. However i was sure that id get a counter offer that id decline or a declined offer and moved on with things. a day passed and i had not heard anything and so i took another look and started digging into the features of the bike. I was saddened to see it did not have TCS or ABS so i became a bit more disinterested. a couple more days went by and it was a few hours from my offer expiring out. I figured at this point the seller had ignored my offer but didn't decline it to leave me on the hook and throw my lowball offer back in my face a little. Suddenly I get an email notice saying offer accepted and a message saying call me at this number. So i call and I talk with the seller and it turns out he was not joking about leaving the country he was leaving 6 days from then. I send him his money and work on getting a logistics company to pickup the bike and bring it to me. I go onto Uship for the first time ever and setup a listing. Now you will remember eBay with their Uship tool said about 500. well here is the kicker you post on Uship and you need to give it time to get a few people to submit offers. Time was not something I had on my side. After 24 hours I had only 1 offer and the company assured me they would have it picked up by the end of the week. Unfortunately it was $1100 this was not ideal but I had made a commitment and at this point id have a bike that i was liable for parked on a street corner on the other side of the country. The take away from this is if you are shipping a vehicle or something large a long distance you will want to allow for 1 week to find a logistics company and another week window for pickup. So I book the company on Uship and they say it will be picked up the next day. Well the next day comes and the shipper did not contact the buyer. Then the next day the shipper pushes back pickup twice then reschedules for the next day. After freaking out about this because for one I did not even know if the bike really existed. The whole rush deal to pick it up and so of wreaked of some of the old school money order scams. I finally got a text from the Seller with this photo of the bike being strapped into a trailer. 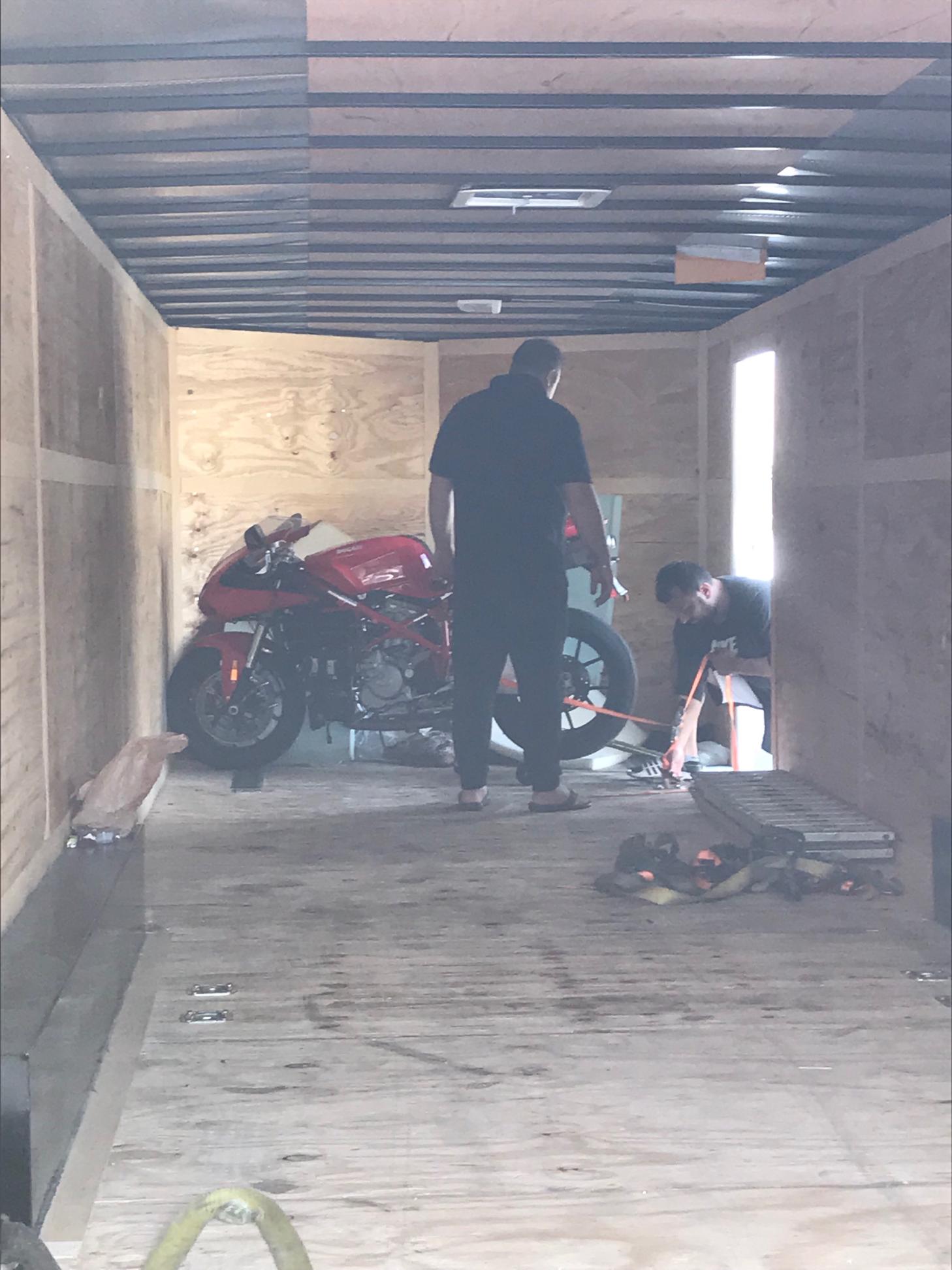 I was relieved a bit at this point we were 2 days from the seller leaving the country. Then 2 days after that i get the FedEx envelope with the title and bill of sale. Now is the time im going to reveal that the bike was Salvaged out in CA and issued a Restored mark in MI. This also strikes a huge value loss to the bike now instead of a $7300 blue book we are looking at $5500-6700. At this point i was hoping the front wheel was not really bent but just the rotors were and made it looked bent.
I ended up having a long time to contemplate about what all could be wrong or not wrong with it as it was originally going to take a week to be transported to me. Well turns out the driver had some issues and it delayed him about a week and after giving me the same run around with rescheduling as he did the seller finally he showed up with it. Now im going to expand on this because it got a little crazy and ridiculous. I messaged the shipper on the day before it was originally suppose to arrive and asked if he was showing up the next day. He responded that he was running a couple days behind and would be showing up in 2 days. I message him a day later and ask if he is still setup for the next day and he said that he was 3 days out. I contact him 2 days later and he says he will show up at 4pm the next day. I give him a call the next day and ask where he is and he said he was in CA and would be at my house around 10:30pm. He calls me at 10:15 and asks if 1AM is too late to deliver the bike i say yes but id be available at 6AM. He says ok 6AM the earlier the better because he has another appointment at 7. 6AM comes and goes and at 6:30 i call him. I clearly wake him up and he says he got to the Walmart down the road at 3am and forgot to set an alarm. by 7am the bike was unloaded and he was gone. I played around with the bike slightly before I went to work I tried to start it but the battery was drained and the fuel line was loose so i managed to have it Puke Gas allover the garage.