Im going to start off by saying that most of this was written in an email to a fellow Fiero enthusiast giving my background in Fieros. I have told this story a few times now and figure ill just toss it up as I do not have any Fiero stuff on the site as of this post. This is due to the Fiero project coming and being put into mothballs before the site.

I've only recently pulled my Fiero out of mothballs after 8 years of it sitting around (July/Aug of 2020) COVID provided some time for me to work on some things. It also made me rethink my daily driver.

So basically I got my first Fiero back in December/January of 05/06. On December 14th I was run off the road and totaled the CRX I was driving. This resulted in my first ride in an ambulance. We had fought with the insurance companies and it had looked like they wanted to take the car and pay me out for it. I did not have another car at the time and the CRX was banged up. With the threat of the insurance company taking the car I started looking for a new one. I had been looking at projects for a bit and had stumbled past this black and silver car a couple times but they wanted something like $1500 for it and that was out of my price range. After Christmas this car was still posted I really did not know much about Fieros at the time but I thought it looked cool. I gathered all of my cash including the money I had just gotten for Christmas. (I had still not gotten any payments from the insurance company for my CRX) I went down to San Jose and met the people selling the Fiero. I offered 900 or 1000 (I can’t remember what I was able to scrape together.) It had passed smog 60 or so days prior and the smog was about to expire for transfer of owner. The guy selling it was actually selling it for his brother who moved to Alaska. I tried to talk him down reminding him that when the smog cert expires he will have to resmog and so on. He said no. So we went and got in the car to leave. Suddenly he changed his mind after remembering we had driven an hour to see the car. I brought the car home 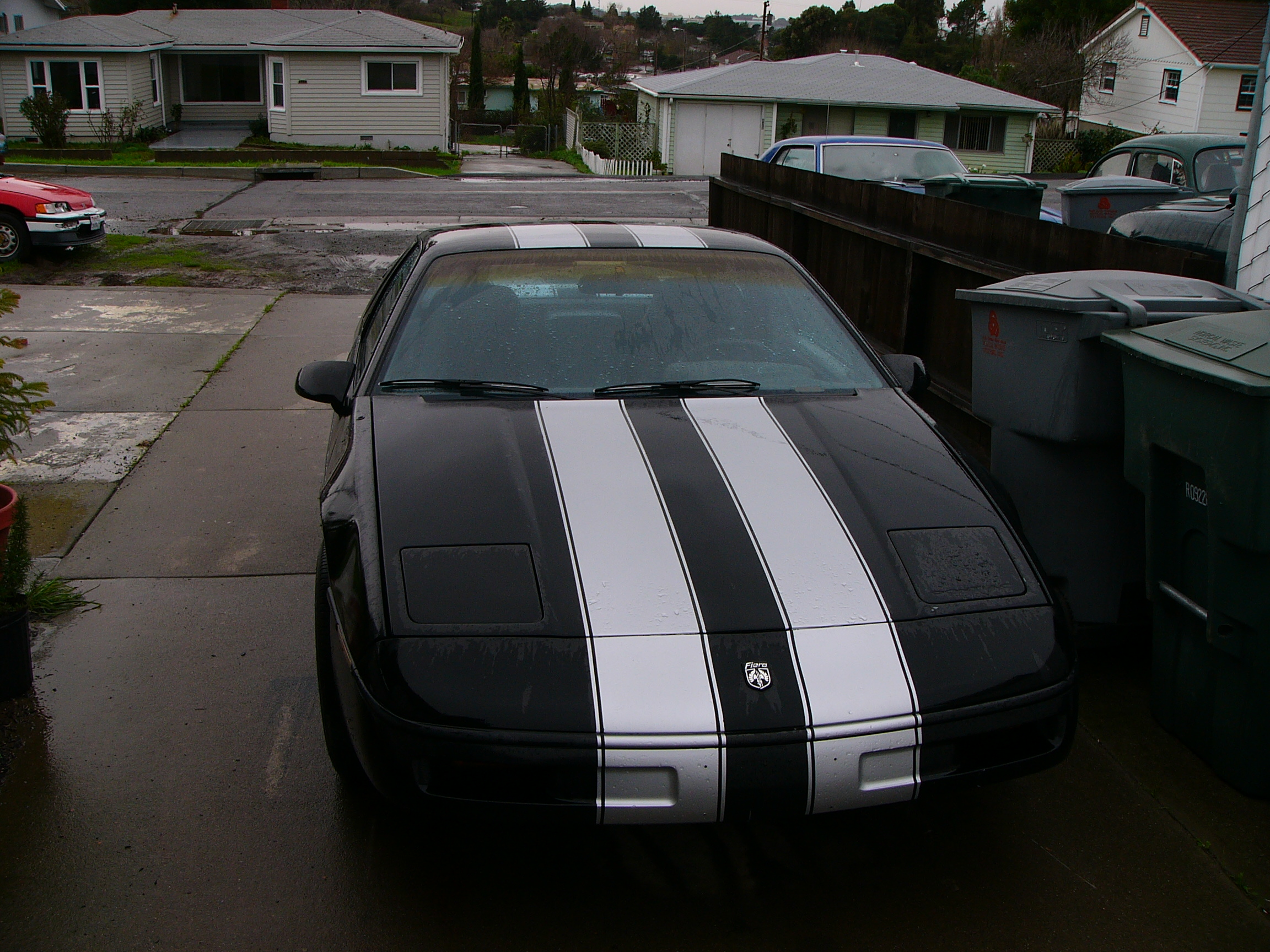 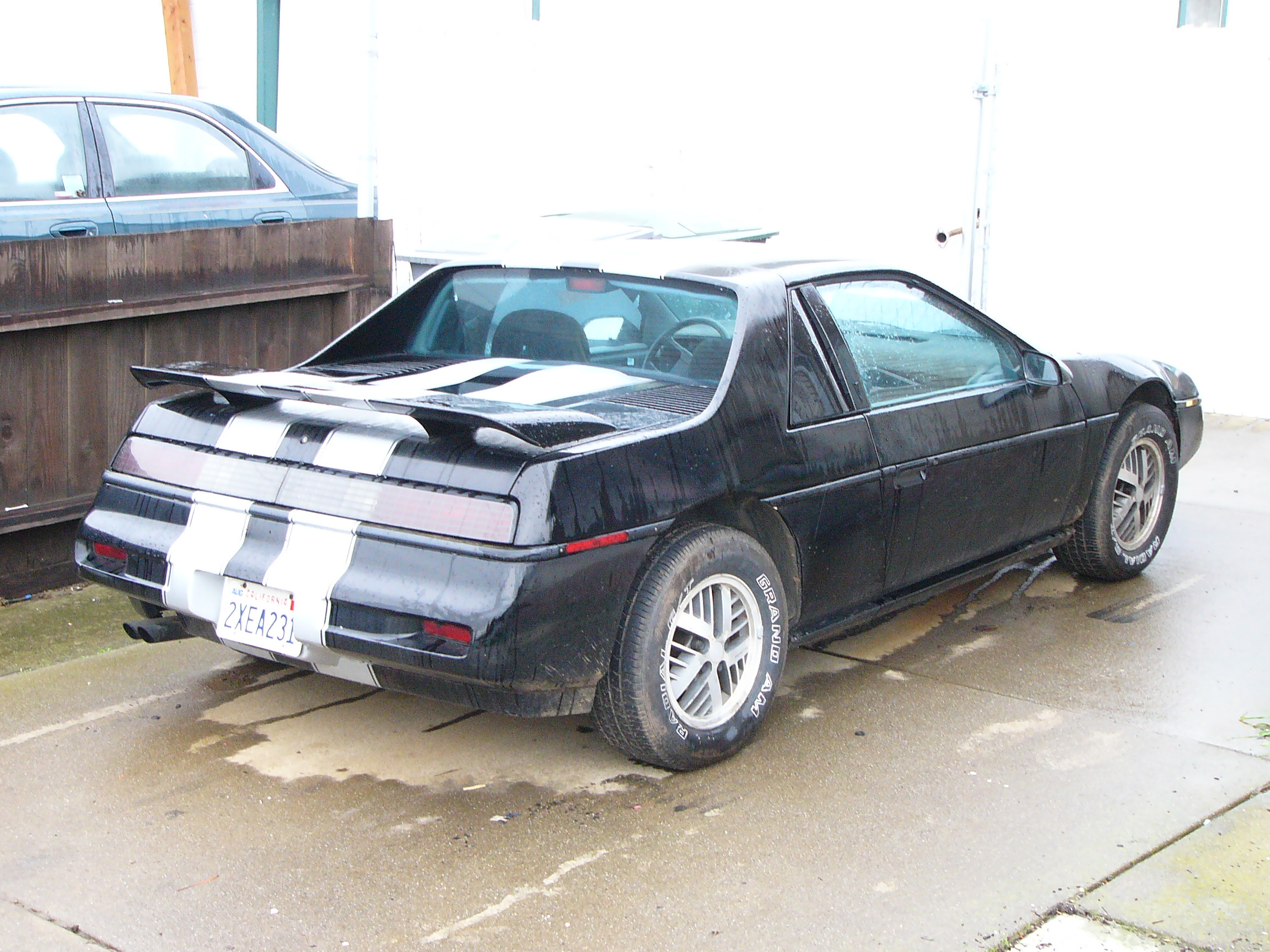 I drove it as my reliable car for quite some time, I blew the clutch out of it some point in 2006. The car had come with some paperwork but it was not clear if it was just a quote for work or actual work done. That paperwork made it seem like it had a new clutch and I think the craigslist ad said new clutch. But the clutch went out probably within 6-7 months of me having it. I did the clutch without dropping the cradle and continued driving it. The engine also blew blue smoke. I had gotten the head done and it still smoked leading me to believe it was rings(but it only had 80k on it). In 08-09 I threw the timing set and replaced the lifters and the timing set. I had also picked up an 86 SE v6 auto but quickly sold it. In 2011 I decided to redo the bottom end and replace the trans. The 3rd gear had always had issues. This came at the time I blew my second clutch. I redo the bottom end and pick up a bad front main and rear main leak. I replaced the front main 2 times and redo the pan gasket a couple times but it’s just puking oil and still blowing blue smoke. While it was down I also redid the bushings and ball joints and bearings on everything replacing bushings with Polly. I also redid the rear A arms in tubular. 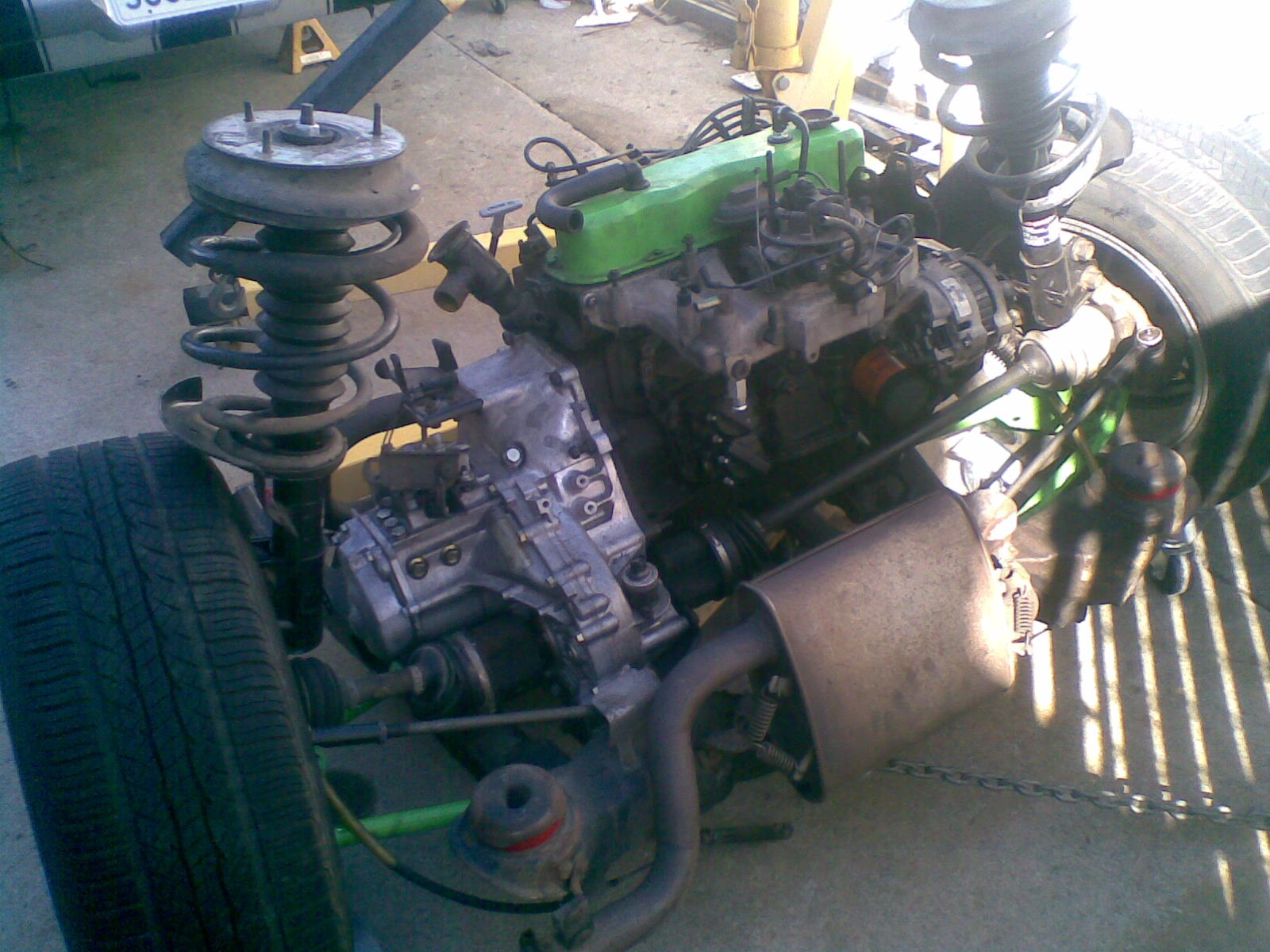 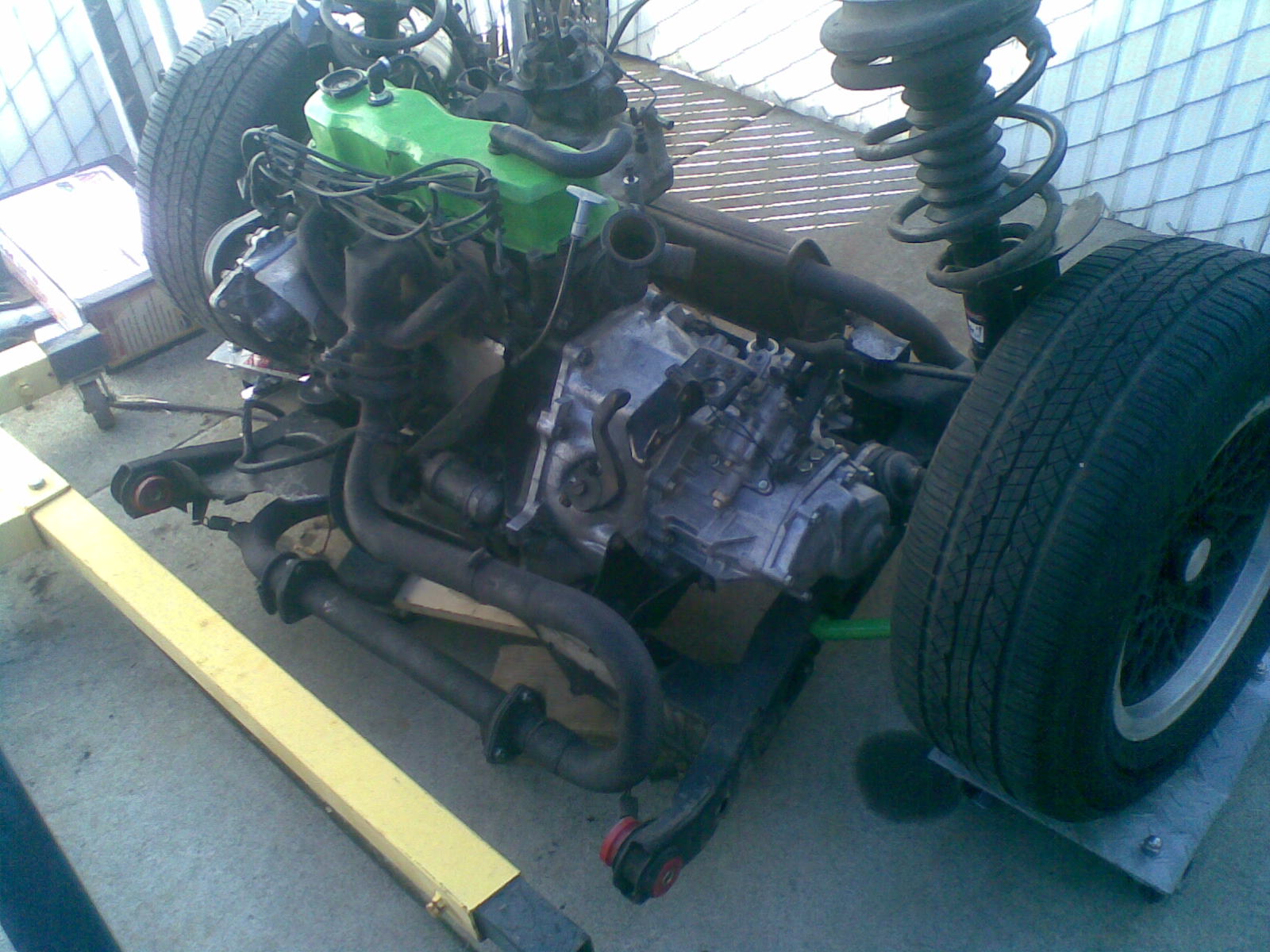 I had taken the car in for alignment and they did not bother touching the top ball joints on the front just said “its off” leaving it with some horrid positive camber on one side. It had puked so much oil I figured id take it back and complain once I fixed the leak. Around this time a Golden Gate Fiero member in grass valley post an 88 duke with 10k miles for a great deal. I jump on that and swapped an 88 duke into my 87. I also redid the clutch because the new one I had in there was soaked in oil. At this point I pick up some new oil leaks from the engine sitting. After I nail them down (including pulling the pan and redoing that gasket twice. I find I have a rear main seal leak. Brand new trans 10k engine and a second new clutch that has just gotten soaked with oil. I throw in the towel and park it. I had just redone the entire brake system and suspension system (in poly) as well. I let my now Wife drive it to work for a while as the leak was not too bad for her short commute. By 2013 she had her own car so I just parked the Fiero still frustrated with the leak. So fast forward 7 years. I started it every few months and let it run between then and now. I finish the vfr800 project I have been working on and decided I wanted something else to work on. I decided because I do not see needing to commute as much to get the Fiero running and ditch my daily I had. I bring the Fiero into the garage and do the rear main and new clutch. Start it and I have oil on the flywheel again but low. So I pull the pan and find a void where it was leaking and re seal it. About 3 or 4 days of work. Kind of felt silly for letting it sit so long over that little work. I then decided to make the AC work and converted it to R134a. After that I called it done and sold my former daily.

With the Fiero marked as done I needed another thing to work on. I offered to my wife to pick up a Camaro for her and fix it. She had wanted a 90s Camaro for a long time. However, after looking at a few she had gotten disheartened and thought what about another Fiero. She happened across a post in Sac for 3 Fieros 500 each. She nails down the guy and we go look at them. Turned out the guy was not actually getting out of Fieros and had not posted the cars, someone posted them because he needed to get them out of where he had them stored. We ended up picking up 2 cars an 85SE 2.5 auto (my wife doesn't want an auto but we were talked into the second car because it was supposed to have the parts to do a auto to manual swap.) 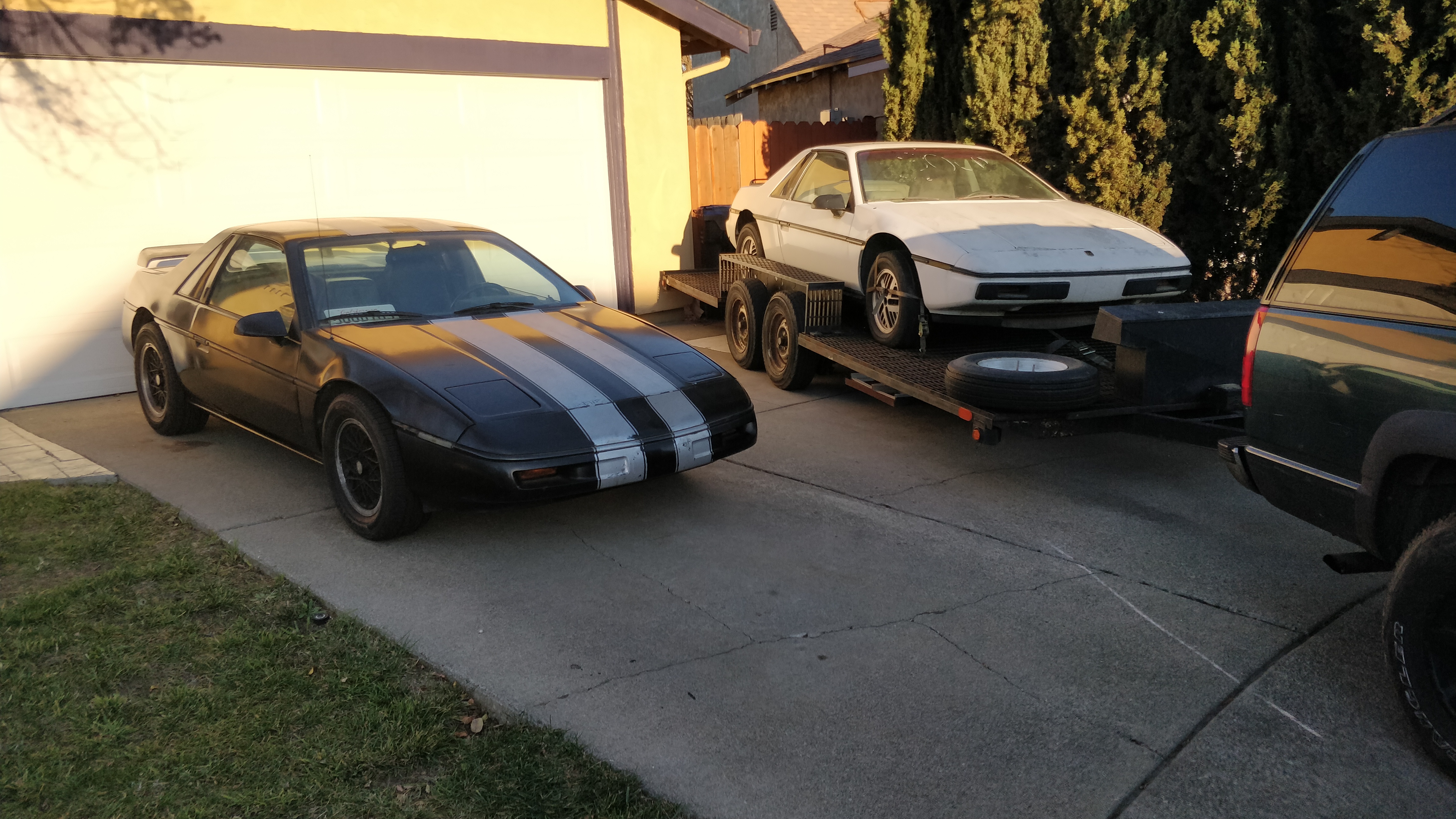 He would not let go of the 85GT 5spd that was the main reason for me wanting to go look. A v6 project would have been a nice change of pace. So after doing parts inventory and trying to figure out paperwork I had figured I was missing major parts on this second car to do the 5spd swap on top of that both engines were done. We start working on getting the second car broke down and gone.

( I decided to strip it to the studs) 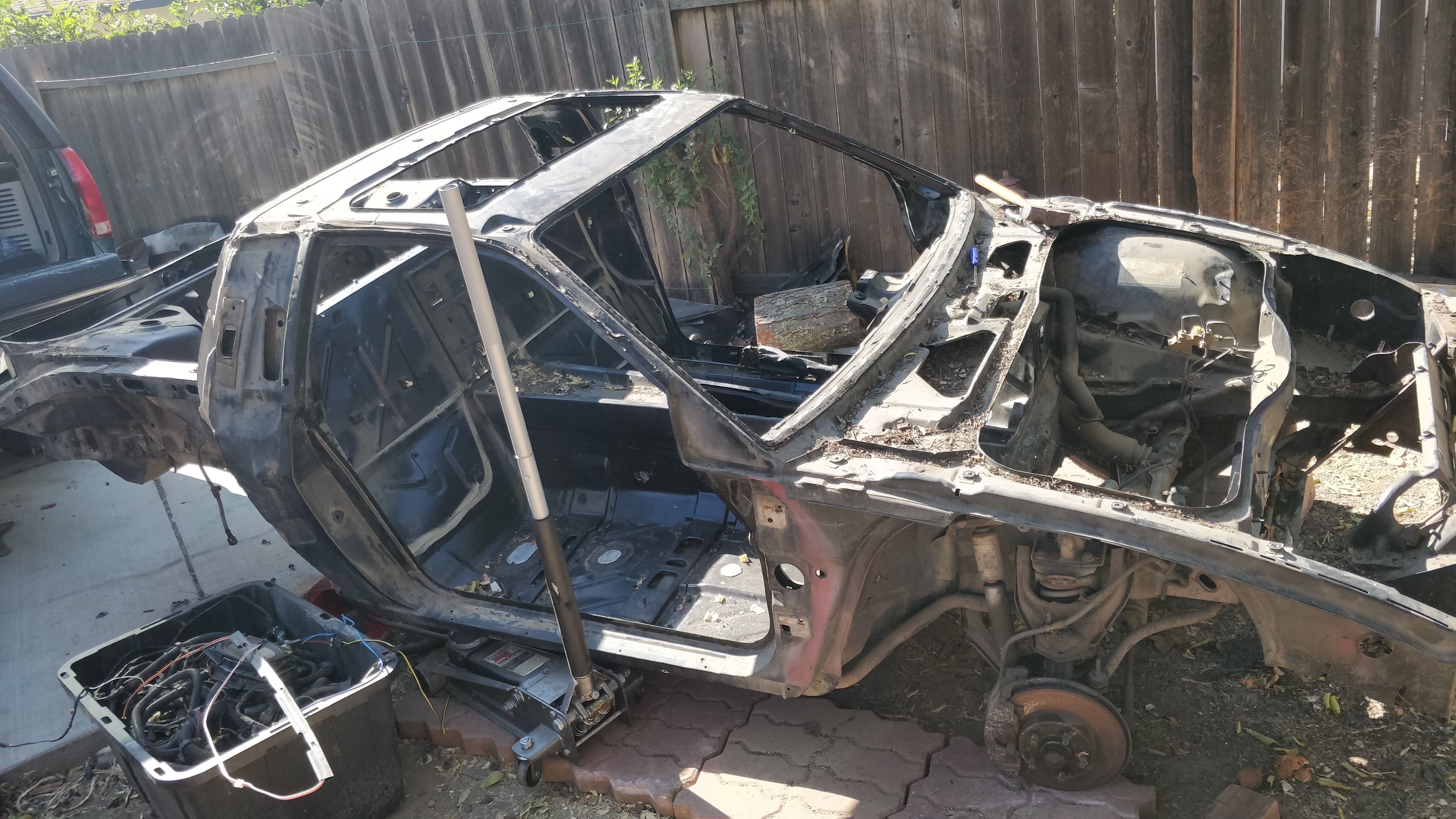 We go to DMV to get the paperwork straight on the 85 and they refer us to CHP (someone may have called the DMV person short when she demanded we unload the car from the trailer for the vin inspection) so we go talk to CHP get an appointment… It’s over a month out.

With this and the fact that the car is in rough shape mechanically and I’m doing a 5spd swap I’m kind of discouraged. A week or so later on October 31st someone I had inquiry about for a Camaro got back to me. We went and looked and picked up the Camaro as it had proper paperwork and didn't need much work to get going. A couple days after that A Fiero forum member appears with some junk yard Fieros pending being crushed in Sac.

I spoke with him and tried to nail down what was at the yard (as I was looking for a full 2.5l 5sp car to sacrifice) I got him to nail down a time to meet at the junk yard as he never sent pics and would only talk about the CJB car (T-Top Fiero) that I was not interested in. Got up to the yard and met the interesting fellow. Looked at the cars and met the really nice owner of the yard. First thing I noticed was the white 88gt I became fixated on. I found an 85 2.5 5spd value leader and knew I had to have that at a minimum. The white GT I was fixated on was an auto but there was an 88 5spd GT there too. So obviously I needed the 2 88gts and the 85. 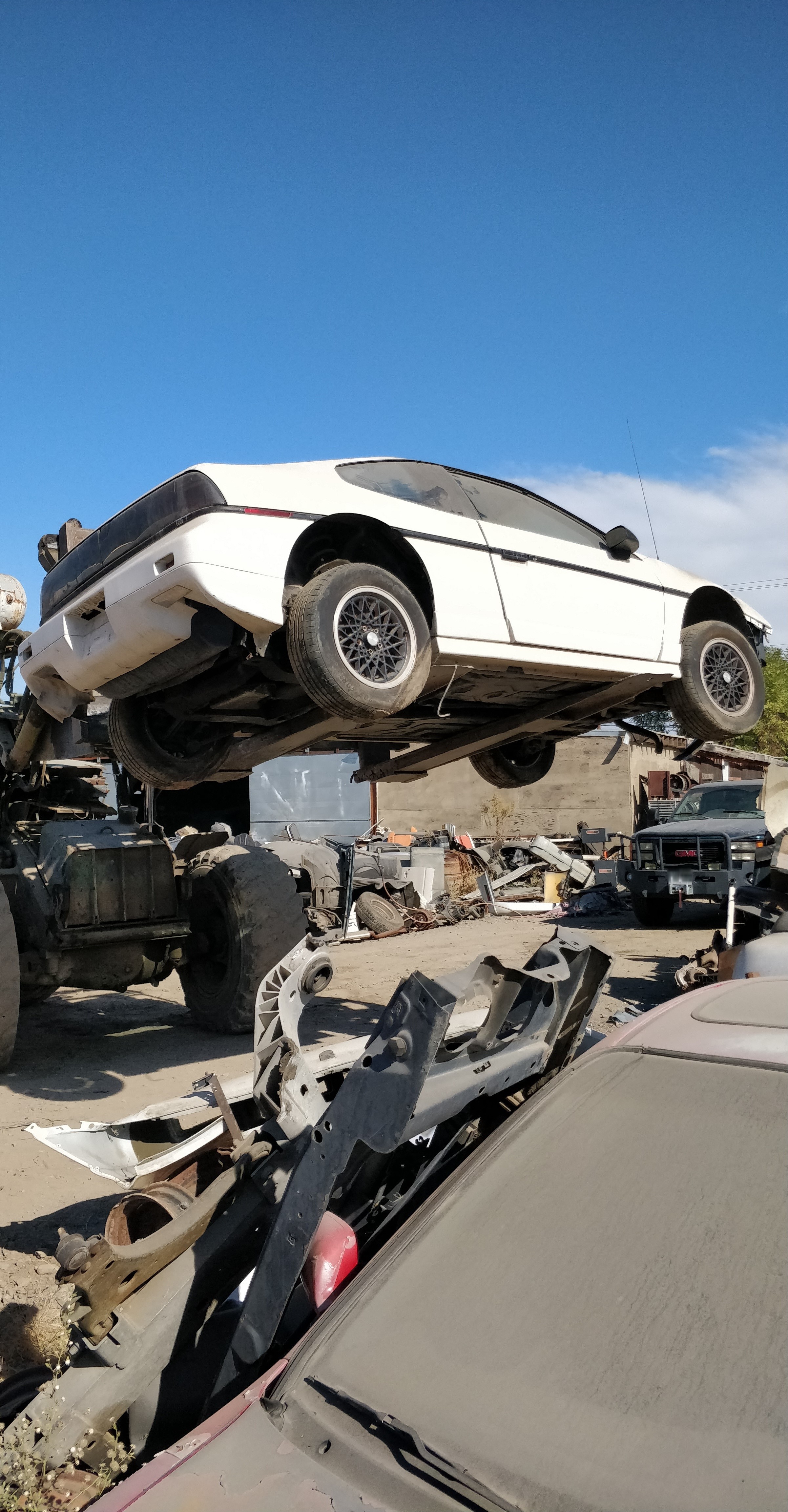 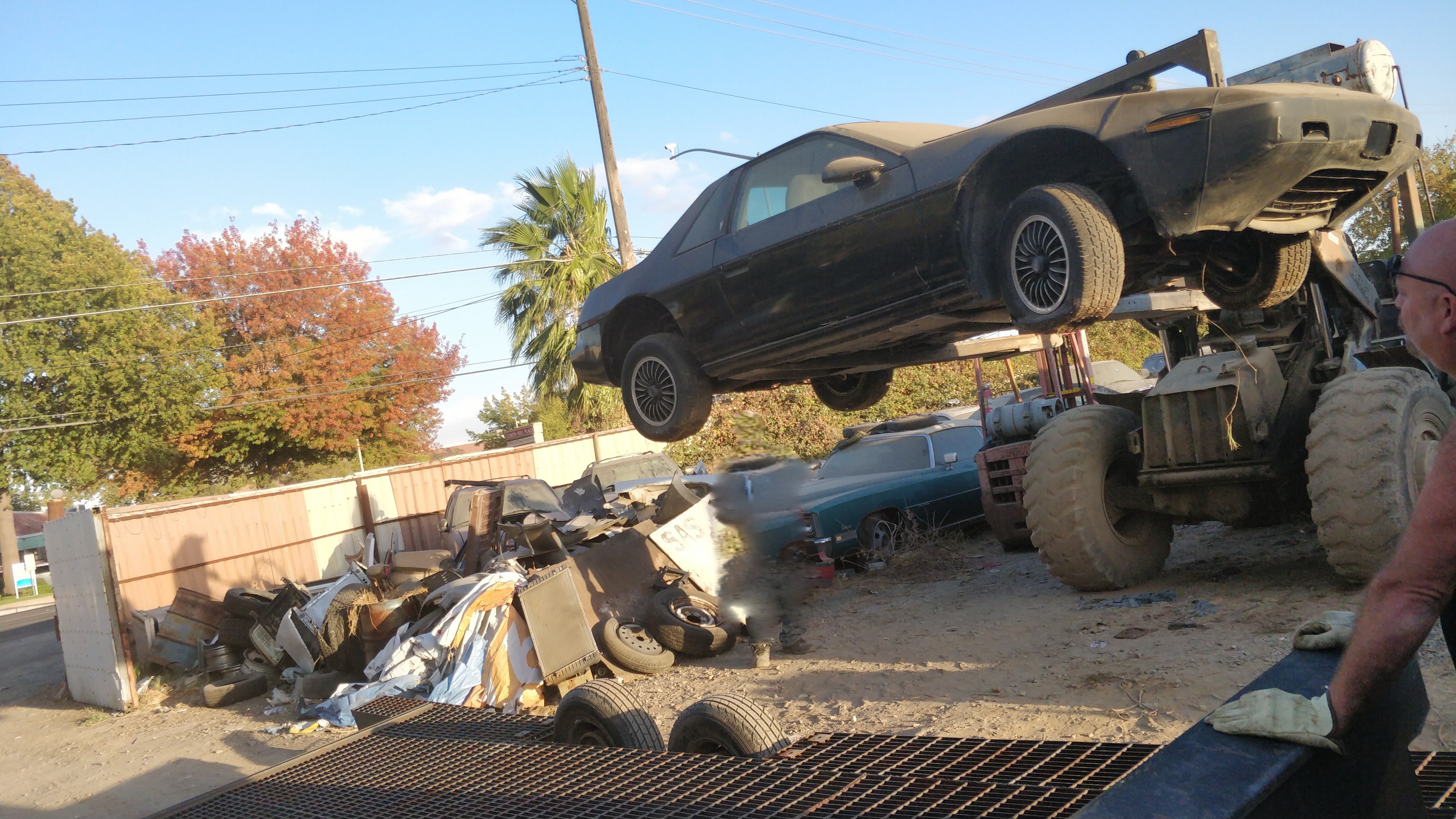 By the time the red one came the whole car on forklift wore off. 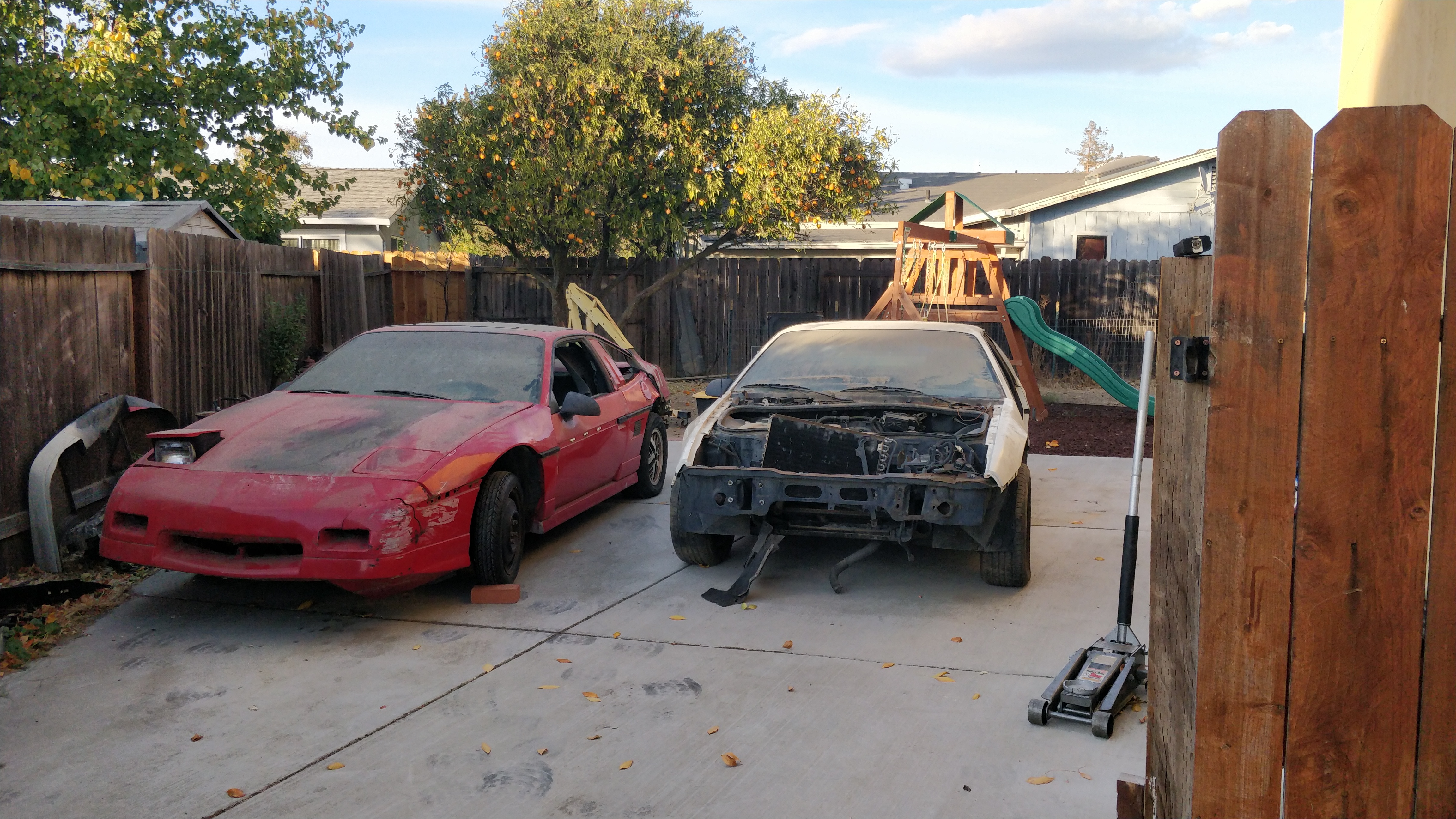 now i'm trying to restore the white GT and my Wife's 85SE. while getting rid of the extra cars and bits.